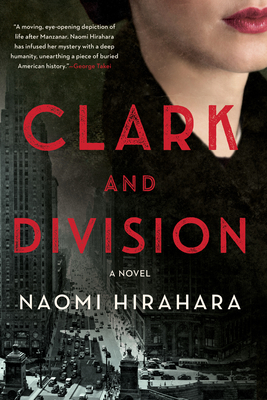 Usually Ships from the Warehouse in 2-5 Days

“Clark and Division is a propulsive mystery and a heart-wrenching examination of Japanese internment and relocation in the 1940s. Hirahara beautifully weaves history and injustice into this fascinating and compelling crime novel.”
— Luisa Smith, Book Passage, Corte Madera, CA

Set in 1944 Chicago, Edgar Award-winner Naomi Hirahara's eye-opening and poignant new mystery, the story of a young woman searching for the truth about her revered older sister's death, brings to focus the struggles of one Japanese American family released from mass incarceration at Manzanar during World War II. Chicago, 1944: Twenty-year-old Aki Ito and her parents have just been released from Manzanar, where they have been detained by the US government since the aftermath of Pearl Harbor, together with thousands of other Japanese Americans. The life in California the Itos were forced to leave behind is gone; instead, they are being resettled two thousand miles away in Chicago, where Aki's older sister, Rose, was sent months earlier and moved to the new Japanese American neighborhood near Clark and Division streets. But on the eve of the Ito family's reunion, Rose is killed by a subway train. Aki, who worshipped her sister, is stunned. Officials are ruling Rose's death a suicide. Aki cannot believe her perfect, polished, and optimistic sister would end her life. Her instinct tells her there is much more to the story, and she knows she is the only person who could ever learn the truth. Inspired by historical events, Clark and Division infuses an atmospheric and heartbreakingly real crime with rich period details and delicately wrought personal stories Naomi Hirahara has gleaned from thirty years of research and archival work in Japanese American history.

Naomi Hirahara is the Edgar Award-winning author of the Mas Arai mystery series, including Summer of the Big Bachi, which was a Publishers Weekly Best Book of the Year and one of Chicago Tribune's Ten Best Mysteries and Thrillers; Gasa Gasa Girl; Snakeskin Shamisen; and Hiroshima Boy. She is also the author of the LA-based Ellie Rush mysteries. A former editor of The Rafu Shimpo newspaper, she has co-written non-fiction books like Life after Manzanar and the award-winning Terminal Island: Lost Communities of Los Angeles Harbor. The Stanford University alumna was born and raised in Altadena, CA; she now resides in the adjacent town of Pasadena, CA.

This feature require that you enable JavaScript in your browser.
END_OF_DOCUMENT_TOKEN_TO_BE_REPLACED

This feature require that you enable JavaScript in your browser.
END_OF_DOCUMENT_TOKEN_TO_BE_REPLACED

This feature require that you enable JavaScript in your browser.
END_OF_DOCUMENT_TOKEN_TO_BE_REPLACED